The North Shore’s very own tropical sushi bar, Banzai Sushi Bar, had a prosperous year in 2012. As we enter 2013, the ohana here at Banzai wanted to look back at all the great events that made 2012 so special.

Perhaps the biggest news in 2012 was that Banzai Sushi Bar underwent a rebranding. Banzai’s rebrand features a new website in addition to a brand new menu. While the new menu retains our classic sushi favorites, the menu expands on Chef Hide’s passion for creating one-of-a-kind tropical fusion sushi. Banzai’s philosophy of creating the freshest sushi at an affordable price netted a Honolulu Star-Advertiser People’s Choice Award. Voted on by locals, Banzai Sushi Bar was humbled to receive this great honor for the 4th consecutive year in a row!

Banzai Sushi Bar also expanded our selection of sake. Working with World Sake Imports, Banzai added 15 premium Japanese sakes to the menu. Banzai is now proud to offer one of the most diverse collection of sake on the island of Oahu. For the 2nd year, Banzai Sushi Bar was honored to participate in the Joy of Sake festival. With over 360 different sakes, this Honolulu event is the biggest sake tasting outside of Japan. For the event, Chef Hide showed off his culinary talent by creating a delectable yuba wrapped ribeye steak, enoki mushroom and asparagus dish served in wafu-dashi fondue.

In 2012, Banzai Sushi Bar upgraded its general license, which means Banzai now has a full service bar stocked with everyones favorite spirits. Residents and visitors alike can now enjoy a cocktail, in addition to sake and imported Japanese beer, in our serene oudoor dining area. Banzai Sushi Bar also launched a catering business during 2012. The catering business was immediately busy during the winter surf season, catering events at the Nike House and the Fox House. This year Banzai also continued to support one of our favorite North Shore artists, Mr. Clark Takashima. Banzai commisioned 9 paintings from Clark, and each painting shows a different face and angle of the Banzai Pipeline, our namesake.

Banzai Sushi Bar is known for hosting great Saturday night events with live entertainment, and 2012 was no exception. Banzai partnered up with our favorite radio station, KTUH, as they  launched their new North Shore frequency of 91.1 FM. Our North Shore tropical sushi bar finished the year in style when we hosted Night of the Legends to end the surf season. Night of the Legends was a night filled with classic surf movies and there were also appearances from surfing legends such as Randy Rarick, Tom Carroll, Gary Elkerton, Buttons Kaluhiokalani, Reno Abellira and more!

Banzai Sushi Bar will continue to keep it real and keep it raw in 2013. Mahalo for your continued support. Arigato gozaimasu. 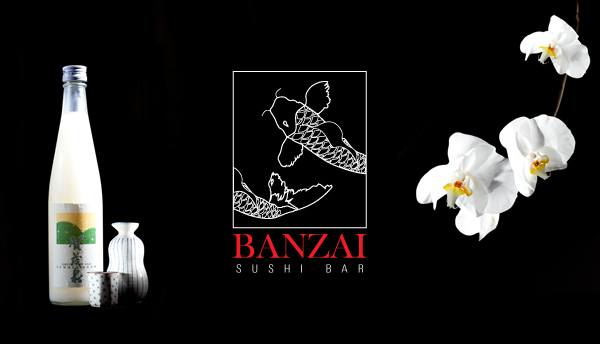 “Our philosophy has been focused on always trying to use local produce, to create the freshest sushi at an affordable price,” says Banzai Sushi Bar’s owner Samuel Bendenoun. “Our new menu reflects Chef Hide’s tremendous culinary talent that artfully infuses tropical ingredients into traditional Japanese cuisine.” With one of the best collections of sake found in Hawaii, featuring over 20 different brands of sake, any connoisseur of the precious rice wine will be in sake nirvana.

Banzai Sushi Bar is quickly becoming a destination for tourists staying in Waikiki especially on Saturday nights when the restaurant features live entertainment. “We are a small, creative team that values working closely with the farmers on the North Shore. I think when you enjoy a meal at Banzai, you can really taste the fresh ingredients,” continues Bendenoun. Take one bite of Chef Hide’s delectable Maui Wowi Roll and you will swear you’ve never tasted better sushi anywhere else. With vegan, vegetarian and gluten free options, Banzai Sushi Bar caters to every dietary need. And the best part of dining at Banzai Sushi Bar is that you get to enjoy your meal in a serene outdoor dining area.

So what are you waiting for? Come up to Haleiwa and begin your culinary love affair with some of the best food in Hawaii. Voted one of Oahu’s best four consecutive years in a row by StarAdvertiser, at Banzai Sushi Bar, they like to “keep it real, and keep it raw”.